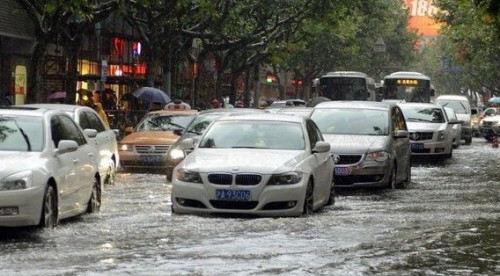 On September 13th, the strongest rainstorm since this yearâ€™s entry into the city swept against Shencheng, and for the first time since 2010, a red rainstorm warning was touched. The Asian fluid network reporter learned from the Shanghai Municipal Flood Control Office that Shanghai's 21 stations have reached a heavy rainfall standard and 74 stations have reached the standard for heavy rainfall. The hourly rainfall at the Pudong Bureau in the â€œstricken areaâ€ reached 124 mm, and the rainfall at 10 stations exceeded the 100-year standard. The heavy rain resulted in short-term water accumulations of 20-50 cm in Pudong, Huangpu, Yangpu, and Changning districts. The late peak traffic and two subway lines failed due to moisture.

A torrential storm hit Shanghai in a hundred years. "It can be said that today's typhoon of the sea anemone's typhoon amounted to two hours in some parts of Shanghai today. The amount of rainfall in the Shanghai area was generally above 100mm on the day of the anemone's impact." The person in charge said.

According to statistics from the Shanghai Municipal Office of Flood Control, the cumulative rainfall as of 18:00 shows that the rainfall at the Pudong New Area Station is the largest at 141 mm, the Xujiahui Station is 70.7 mm, and the Songjiang Station is 29.4 mm; the rain in the remaining sites is more obvious: Penglai Park is 139.7 mm. Nanyang Middle School 137.2 mm. Nanyang Park and Pudong Weather Station also experienced eight thunderstorms.

According to the Municipal Office for Flood Control, due to short-term rainfall exceeding the standard of 36mm per hour, combined with the blocking of the inlets by the wind-blown leaves, more than 80 sections of roads in Pudong, Huangpu, Yangpu, and Changning districts are short-lived 20- 50 centimeters, causing local road traffic to be obstructed, and more than 10 roads in the old district have accumulated 10-30 centimeters of water, mainly in the Huangpu Temple area.

Rail transit line 6 Yunshan Road to Wuzhou Avenue station down line due to foreign body caused by touch screen power loss, affecting the normal operation. No. 2 line caused signal equipment failure due to the intrusion of external rainwater, and People's Square station stopped at the Shanghai Science and Technology Museum Station once.

The flood prevention system in Shanghai quickly responded to the second-level emergency response requirements. Each drainage pumping station immediately moved into a rainstorm mode of operation; various sluice gates strengthened the operation schedule, and efforts were made to reduce the water level of the river; more than 1,000 workers in the city quickly rushed to the Jishui section to clear the garbage in the intake. Nearly 100 fire engines and mobile drainage pump trucks in the city grabbed water.

The reporter learned that as of 19:30, with the exception of the individual road sections in the Yangshuo area of â€‹â€‹the Pudong New Area, the water accumulation has been basically ruled out. At 18:40, the Meteorological Observatory lifted the red rainstorm warning. The city flood control headquarters also decomposed the orange early warning signal of the flood prevention and defense station at 19:15.